Add Vermont to the list of states enacting laws that limit the use of unmanned aerial vehicles (“UAVs”) by law enforcement personnel.  But, there is a twist in that state.  Lawmakers have also proposed specific laws to regulate the private UAV industry.  It is reported that U.S. Representative Peter Welch has proposed a law that

requires private drone owners to submit information to the FAA [Federal Aviation Administration] in order to fly their crafts. To get a license, they have to tell the FAA who will operate the drone, where it will be flown, what type of data will be collected, why it’s being collected and how long it will be kept on hand. All of that information would be published online.

The proposed law, if enacted, would be a federal rule of Congress.  This begs the question about the jurisdiction of individual states like Vermont to regulate their own airspace.  Technically (and legally) speaking, only the FAA has jurisdiction over the registration, operation, and safety of drones and UAVs.  The states do have a role to play and have some say-so about air rights. 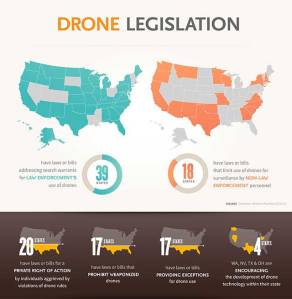 It is an open question whether some states will resist the involvement of the federal government when it comes to purely domestic, intra-state operation of drones.

Here is a link worth watching – U.S. Senate hearings on drone use in the U.S.