Title here is a bit misleading.  Drone on this blog will. 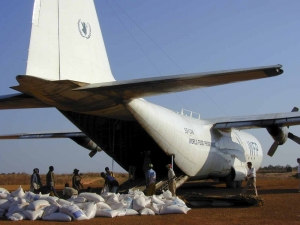 In the news: the United Nations, it is reported, has procured an unarmed surveillance drone from Italian defense electronics firm Selex ES, a unit of Finmeccanica, that will be deployed in the Democratic Republic of Congo in the coming weeks.  “It will be the first time the United Nations has used such equipment and, if the trial use by peacekeepers in eastern Congo is successful, officials and diplomats also hope the drones could be used by missions in Ivory Coast and South Sudan.”

The story is interesting standing alone, but it also focuses a light on cooperation among nations in international aviation generally.  Indeed, the World Food Programme regards aviation as critical to its mission, particularly when roads are impassable or infrastructure is destroyed.  In fact, the United Nations Humanitarian Air Services (“UNHAS“) touts itself as the world’s leading “humanitarian airline.”