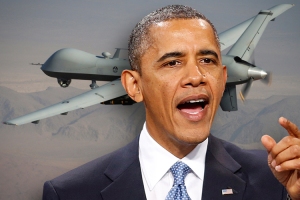 In May, 2013, President Obama gave an important speech at the National Defense University on the use of “drones.”  He remarked that

But when a U.S. citizen goes abroad to wage war against America and is actively plotting to kill U.S. citizens, and when neither the United States, nor our partners are in a position to capture him before he carries out a plot, his citizenship should no more serve as a shield than a sniper shooting down on an innocent crowd should be protected from a SWAT team.

Now, several months later, the president’s comments have been analyzed, and this conclusion made:

Just as the U.S. government justifies its CIA drone strikes in Pakistan and Yemen with the argument that it is at war with terrorists such as al Qaeda and its affiliates, one could imagine that China might strike Chinese Uighur separatists in exile in Afghanistan with drones under the same rubric, or that Iran — which claims to have armed drones — might attack Iranian Baluchi nationalists along its border with Pakistan.

The United States, which has long been the guarantor of international order, should make its drone program as transparent and accountable as feasible and also start doing the hard work of creating some kind of international consensus about the future use of armed drones.

There can be no question at this point that as go drones so goes national security law – another fascinating example of how aviation-related law serves as a proxy for larger domestic and global issues.