Perhaps you have heard of MALEs – medium altitude, long endurance – drones.  Well, now comes a report that evaluates differences among actual males and females with respect to unmanned aerial vehicles. 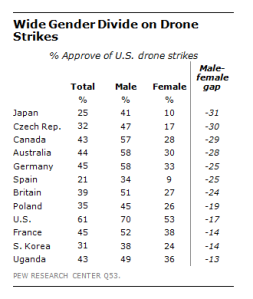 Overall, most publics around the world oppose the U.S. drone campaign. In 31 of 39 nations … at least half of those questioned disapprove of the U.S. conducting drone missile strikes targeting extremists in places such as Pakistan, Yemen and Somalia. The only three countries where majorities support the drone campaign are Israel (64% approve), Kenya (56%), and the U.S. itself (61%). In some countries, such as France, Germany and Spain, there are also sharp ideological divisions on this issue, with those on the political right far more supportive than those on the left